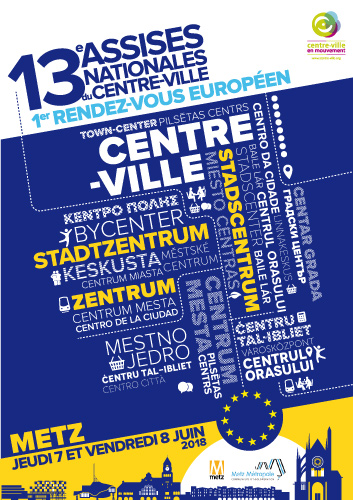 The 13th edition of the Forum on City-Center will be held in Metz and will be an European event !

Information on the Centre-Villexpo Exhibition


The 13th edition of the Forum on City-Center will be held in Metz and will be an European event
Metz will host, next June on the 7th and 8th, the 13th edition of the European Forum on City-Center (« Assises européennes du Centre-Ville » in French).
With its exceptional heritage such as Saint-Etienne Cathedral, one of its proudest symbol (it is indeed one of the most important gothic cathedral of France with around 650 000 visitors every year), and imbued with its history related to the German annexion, this 120 000 inhabitants city has achieved to reinvent itself over time.
Its attractive and surprising city-center has a part built by the Germans and is now competing for an inscription on the UNESCO wolrd heritage list. Trade has always played an important role in Metz history. The city has been nicknamed « Metz the merchant city » and is indeed the first place for commerce in its agglomeration with 640 shops in the core center and more than 2 000 accross the whole metropolis.
Metz is implementing a triple-pronged strategy : city planning, animation, attractiveness by relying on a network of all city-center actors.
Planning : Since 2008, the municipality has made numerous planning improvements to renew urban space in order to structure the city of tomorrow: urban planning efforts to bring inhabitants into the city-center, opening of a convention center, implementation of a public transportation network with separate lanes the « Mettis », new installations to keep jobs into the city center (since 2017, the former station hosts the headquarters of the National Institute For Statistics and Economics Studies), enlargement of pedestrian space, etc.
Animation : « Books in Metz » in April, streetart festival « HOP HOP HOP », family friendly event in streets in July, « Mirabelles’ festival » in August, or Christmas festivities begining in mid-November… Those popular events bring people and flows into city-center giving an influence to the city-center.
Attractiveness : Attractive centres (Pompidou Center, rooms for today’s music in the Arsenal, renewing of cinema offer…) to create flows commerce needs. Another asset of Metz city-center is its capacity in terms of parking places (more than 15 300 places).
Finaly, Metz is one French city with a strong European history as the birthplace of Robert Schuman, one of the funding father of the European construction. Since 2000, Metz is also a member of the cross-border network QuattroPole along with the city of Luxemburg, Sarrebruck and Trier. They share experiences, good practices and implement common innovative projects together.
The Forum will be the opportunity to feed debates and interventions with an European dimension.
See you next June 7th and 8th to discover the surprising city of Metz !